For the Public Record

A quick look at the calendar shows it’s that time of the year again. The date creeps up on you. This year, however- marks the fifteenth year since that horrible day- a day that’s been seared into my memory. Fifteen years is a great number of years that’s passed. Volumes have already been written to record, to analyse, and to reflect on what happened that day. It seems a proper civic duty to add my own recollections of that day from my point of view to the public record. For this reason- I record the following entry.

September 11, 2001- was just like any other early autumn day. I was a young Goldman Sachs programmer heading into work that morning in Lower Manhattan. I had recently transferred to the electronic trading team and was looking forward to a day of testing GS’s system with Cantor Fitzgerald’s eSpeed.

I was slightly peeved when the N train I took to work from Brooklyn stopped without explanation at Pacific Street. Thinking that it was a usual MTA malfunction, I walked over to the nearby Atlatnic Street station to transfer to the uptown 4 train. This train took me to the Battery Park Bowling Green station- which was only 2 blocks away the offices at 125 Broad Street.

The time was 9:15AM. I remember the exact time because at that point I was slightly peeved at being made tardy for work by the failing public transit system. As I rushed up the station exit staircase to make up for lost time, a work colleague grabbed me on the shoulder. He was heading in the opposite direction on the way down the station staircase. In terse words, he told me to go home. Puzzled, I asked why. He said- “Look up. Two planes crashed into the World Trade Center.” and quickly disappeared down the stairs.

Right at the top of the station exit stairs, I arced my head up and looked straight up Broadway. Against a cloudless blue sky, I saw huge rising plumes of smoke. Fortunately, I was a tech enthusiast- and happened to be carrying a digital camera at the time. Remember- this was back in 2001- in the era before iPhones and before iPods. I took this snapshot- 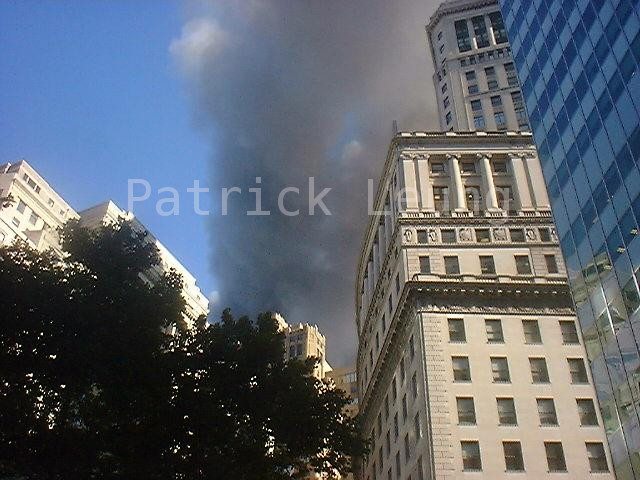 Though my colleague had told me what happened, it just didn’t register that what he said was real. In 2001, terrorism was the sort of news event that only happened in the Middle East or Africa. Even though there was a WTC bombing in 1994, it was already a forgotten memory. And because of that, I did not feel any fear.

“Just Get To Work”

It never occurred to me to leave. My objective- quite stupefying now looking back- but oddly rational at the time- was to get to work. It must be the years of social conditioning that makes someone show up to work even as the world burns.

I walked two blocks eastward to Goldman Sach’s office building at 85 Broad Sreet- and found a throng of people gathered at the entrance. It seemed that just about everyone had come down from the building. Unbeknownst to me at the time- but I learned a few days afterwards- my GS colleagues had just witnessed the second plane crash into the towers and were making their way out of the building as I was trying to make my way in. Seeing that my efforts to enter the office building would fail, I guessed that my absence from the office would be excused that day. 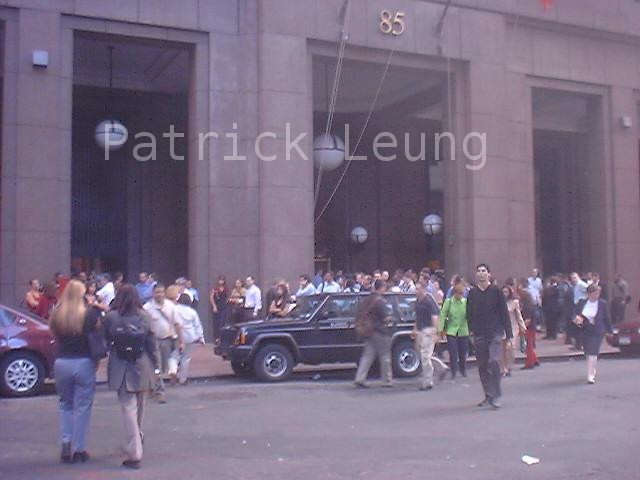 At the time, there was no panic in the streets. People milled about in general confusion as they planned their next steps.

Since there was no way then to get to work- I had no other destination than to walk up Broadway- towards the source of the smoke. Having a digital camera available at the time presented an opportunity that further egged me into taking a closer look at the smoke. As I made my way past Wall Street along Broadway, the skyscrapers blocked my view of the towers and I could not imagine what was on fire.

At around 9:25AM, I took a third snapshot of the smoke above lower Manattan office buildings. 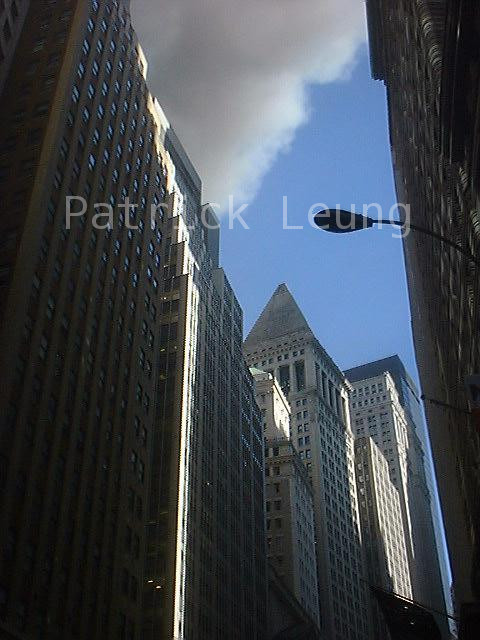 The scene was surreal. With smoke in the skies, I saw what looked like pieces of paper floating down from the sky. As I walked further up Broadway, I finally reached Liberty Plaza. This plaza, with a clearing void of any buildings- finally allowed me to get a good view of the towers.

What I saw dumbstruck me for a second. I saw a whole section of one tower was on fire. I raised my camera for this shot. 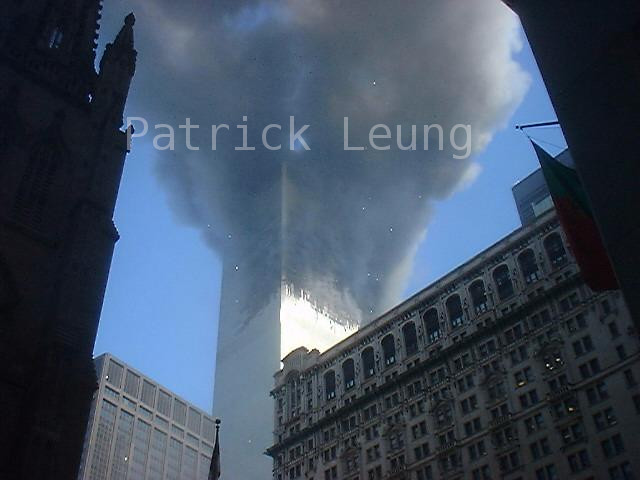 I took another shot with the camera’s digitial zoom turned on. 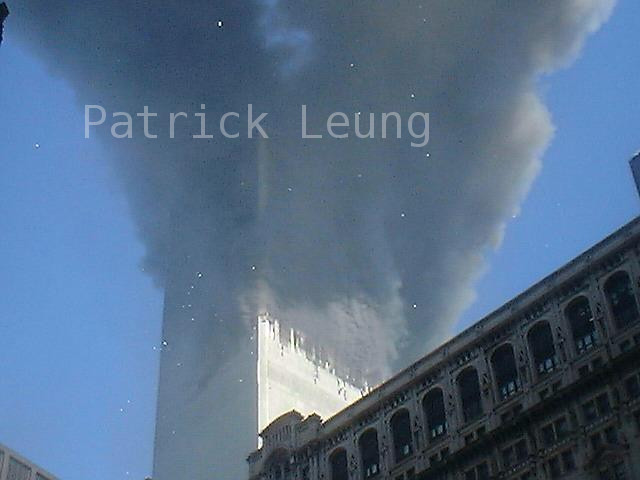 I wasn’t sure what I felt. It was a sense of disbelief. Was this all real? Even though I was witnessing the horror not more than a few hundred meters away, the whole scene did not feel real. It could be that I did not feel to be in any immediate danger. I did not feel the heat from the flames or the noxious fumes from its smoke. I did not feel horror- because the strange thing is that I could not imagine what horror it was to be inside the floors where the fires were burning. Adding to the surreality of the moment- were loose leaflets floating down weightlessly from the sky. They seem to float for an eternity as they fluttered earthbound.

Then as I ambled around to get a better angle of the view, I saw the second tower appear from behind the first tower- looking like twin smoke stacks. 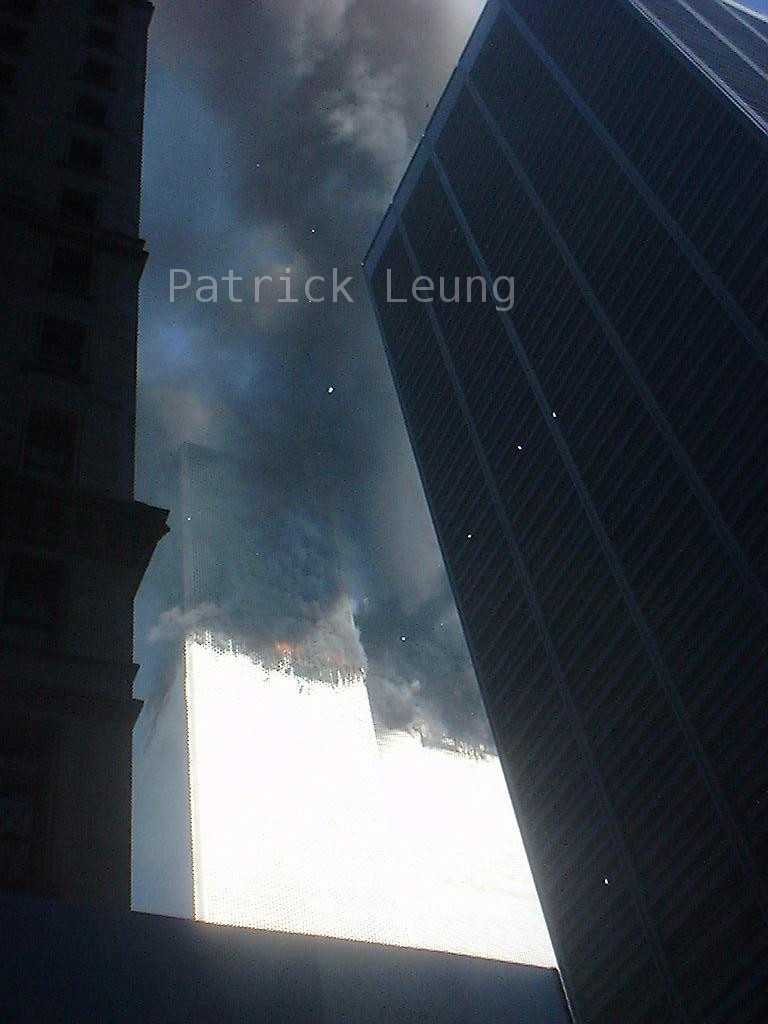 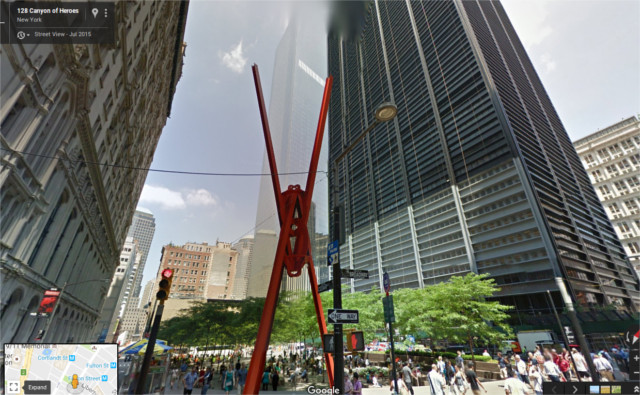 As I walked closer and closer to the towers, I finally met resistance at the corner of Liberty Plaza and Broadway. There a few of New York City’s finest had cordoned off the area. I saw several firetrucks parked nearby- and took another quick snap facing west. 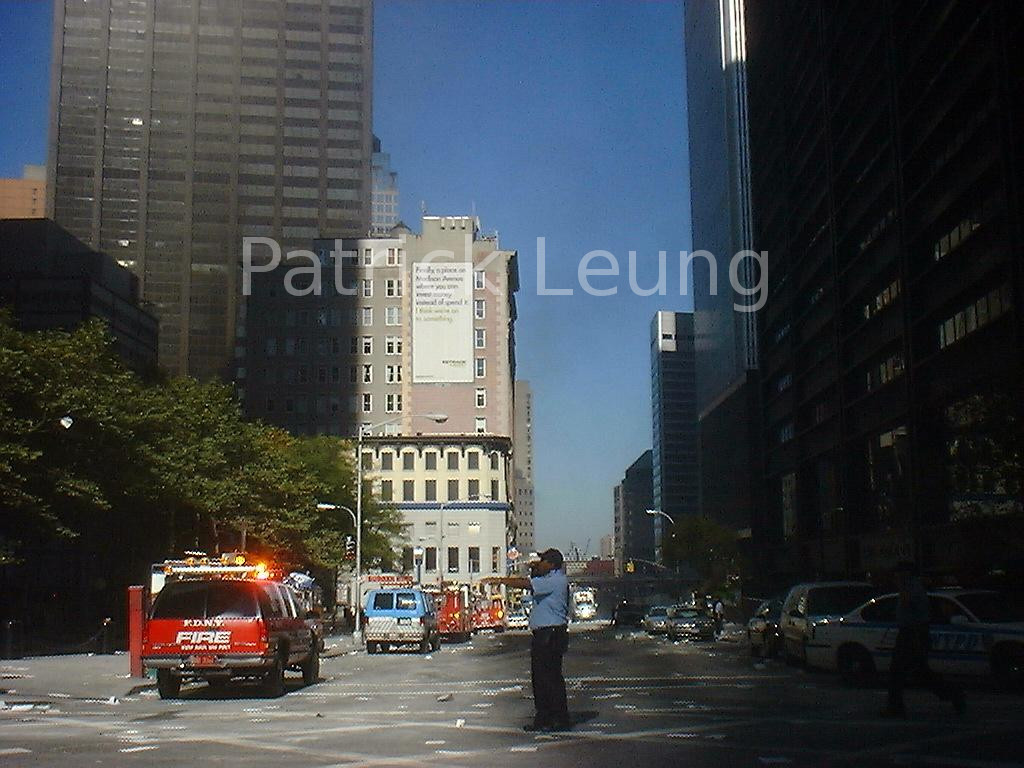 With my path westward blocked by the authorities, I continued walking northward up Broadway. At the corner of Cortland and Broadway, I was able to catch another view of the burning towers. I took two snaps- 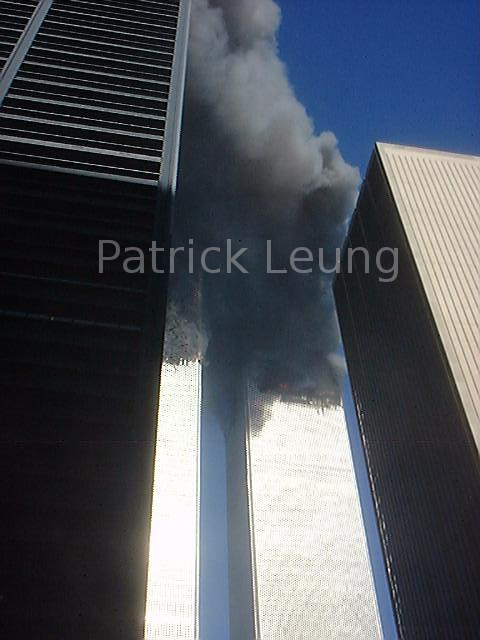 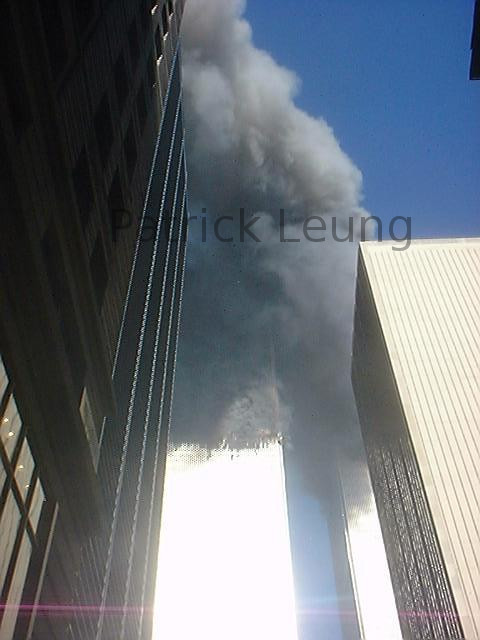 At that point in time, I gazed at the scene for a few minutes- along with a growing throng of onlookers. Meanwhile, the fire burned away. I thought that the fire would be put out all right by the firefighters. Or the fire would just burn itself out. It was just a matter of time. Any other possibility had not entered my mind.

After staring at the fire for a few minutes- with nothing much else going on, I thought to walk back to Broad Street for another look. As I was walking toward Broad Street, I noticed out of the corner of my eye an abnormally huge cloud of brownish dust in the air. I wondered where did that dust come from? It was only a minute or two afterwards that I thought the dust cloud could’ve come from secondary bomb attacks. I remember reading that was a favorite strategy of terrorists- attack first in one primary location, then as the victims wander out in confusion, attack them again with a secondary explosive device.

I thought this huge dust cloud had come from a second wave of attacks. It was only then that I realised someone was trying to kill me. It got personal at this point. It was only then that I started to think about leaving the area. And if there were secondary explosive devices, I thought the best way out of Lower Manhattan was by way of the lower east shoreline- near South Street Seaport. And in the worst case scenario, if the situation got worse, I coud always jump into the river to escape any further conflagration.

I reached South Street- and took several pictures as I walked north. The first photo, takened at approximately 10:10AM shows the thick haze that just appeared - where all my previous photos showed clear blue skies. 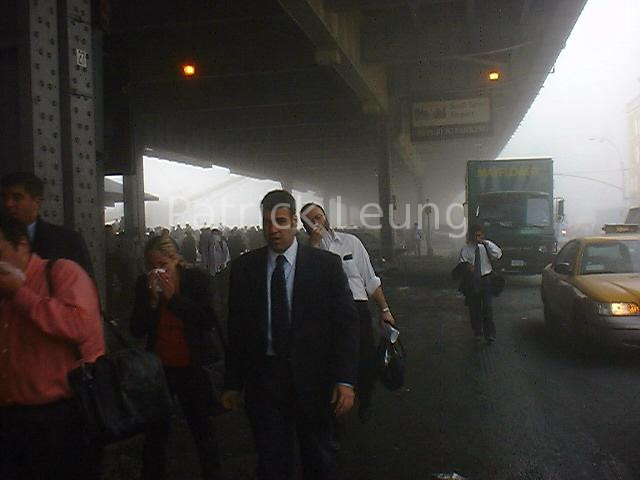 As I walked along, I overheard others say the towers fell down. I did not believe it. I took a look back- and only saw thick haze where the towers should appear. The thick smoke was so enveloping that I wasn’t sure where were the towers. 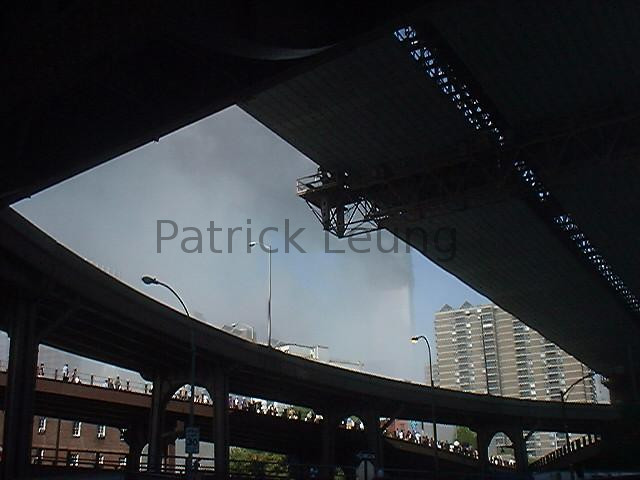 Walking further northward, I took another picture of the stragglers- like myself. 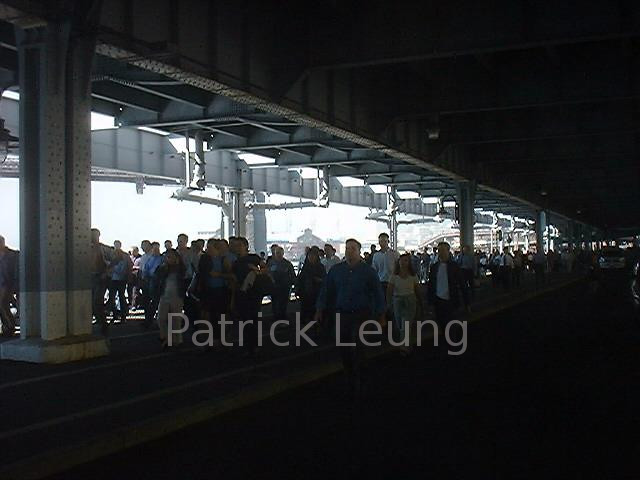 No Sight of The Towers

Once I passed under the shadow of Brooklyn Bridge, I immediately felt more secure. It was as if the bridge was a demarcation line between a war zone and everywhere else.

As I reached Pike Street, I slowed down and looked back. I took several shots and none of them show the towers.

The foreground of this photo shows what look a staging area for a squad of auxillary police. 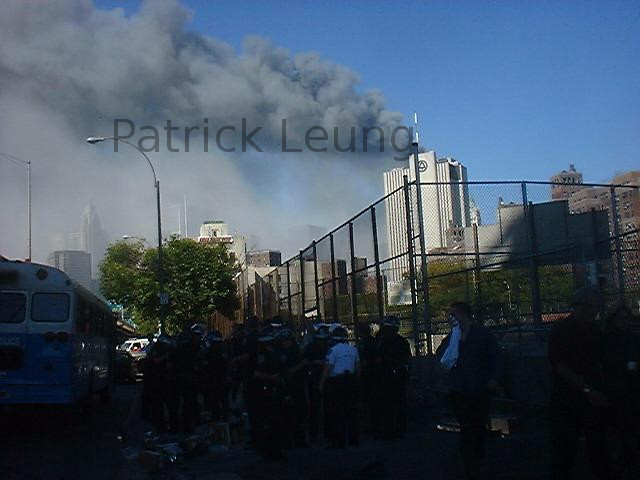 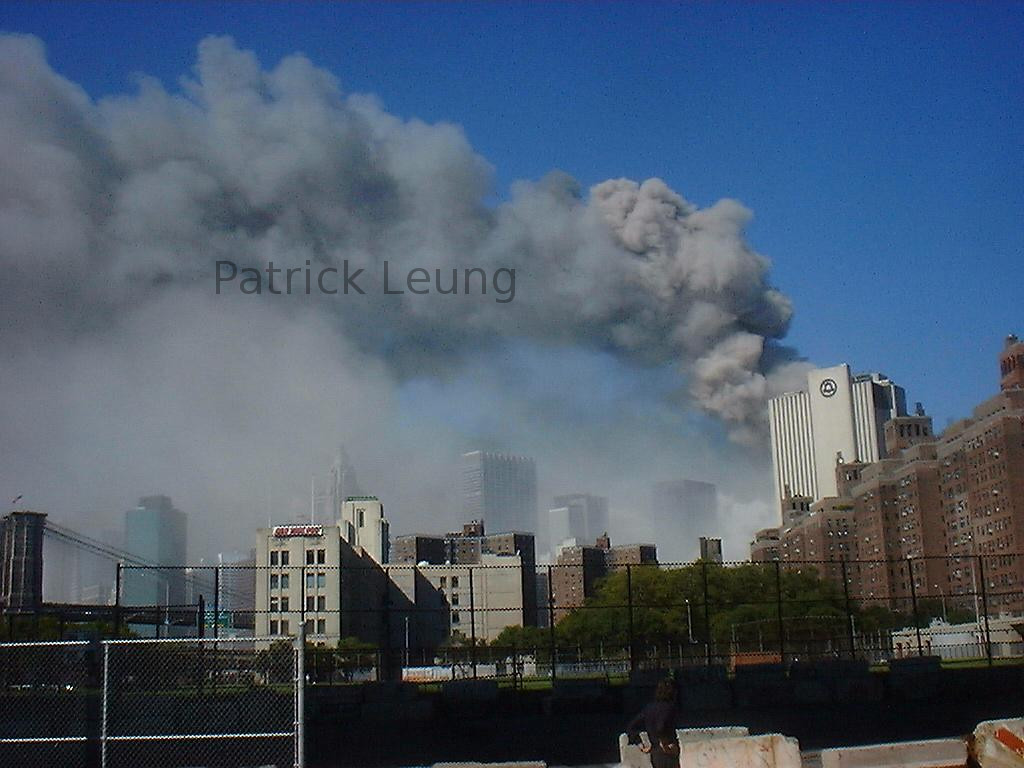